An increasing number of professional bodies are starting to sound the alarm bell. There is something wrong in the society from which we fish our professionals. There is something fundamentally wrong when pass rates of board exams, that test competence, drop to record lows – especially when this is observed across multiple disciplines. The voices of those who cry ‘skills shortage’ are growing louder. Mine does too, and I am worried.

Most recently there has been a significant focus on the failures of auditors in their duty to protect the interest of the public. However, we have been silently, and sometimes loudly, lamenting the drop in standards of professional competence, ethics as well as work ethic across multiple disciplines such as education, journalism, law, medicine etc.

We all sense that something is wrong.

There are many reasons for this worrying trend that include inter alia:

Too many people confuse an academic qualification with competence. Competence is the ability to demonstrate that I can do the job at a certain standard. Analogies that I like to use are those of a chef and a surgeon. Although I think that I can cook a few decent dishes, I have to acknowledge that I could most definitely not compete with a chef. The fact that I can read a recipe that tells me what ingredients to use and in what order I should add them, does not mean that my dish would be at the same standard as the one a chef can whip up. Thus, knowing the theory does not mean that one is competent at the standard of a professional. This is particularly true for professions where critical thinking, deep application of mind, is necessary.

For a moment, imagine that you were admitted to hospital and are wheeled into theatre for a surgical procedure. The anaesthetist administers the anaesthetic and you know that any second now you will be enveloped in darkness as you lose consciousness. Whilst you are under, you have absolutely no control over your body or your surroundings. You are at the mercy of the surgeon and her team. Now imagine her leaning over, just as your eyes are becoming heavy, and whispers to you: “I am so excited! You’re my first!” None of us would want to be under the scalpel of an inexperienced surgeon. Yet, so many want to ascend to leadership positions without gaining the experience necessary to execute the duties in that role without negatively affecting those who are dependent on the outcome of actions and decisions made in that role.

Another area which clearly demonstrates my point is in law. Too many organisations want their commercial legal disputes decided by competent judges with experience and skill in commercial law, but are not willing to make the necessary sacrifices to develop that skill and experience in the growing number of women lawyers and advocates. Where are these women lawyers and advocates to gain that experience and skill when business does not help develop it by engaging them in commercial legal work?

In my doctoral thesis I developed a model that differentiates between capability, competencies and competence. In subsequent years I have developed it further to what I now refer to as the 8 Cs to being a Captain Commandeering your Professional Destiny. The eight concepts coincidentally all start with a C, which made it difficult for me to resist clustering them together. They are in ascending order (and illustrated in the diagram below):

In order for us to ensure a sustainable future for our country, it is imperative that everyone works together to build stronger professions, right from the individuals to the education system, employers and professional bodies. The integrity of our institutions and the next generation, to whom we need to hand over batons, depends on it. 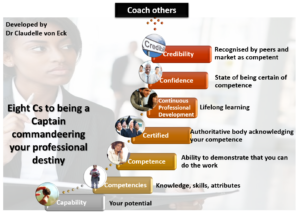 Eskom is broken, but it was not the Guptas and bailouts will not fix it

The Eskom story has been told many times by those who are eager to restructure, unbundle and ultimately privatise it through the independent power producers. It is no different from the hunter who tells the story of a lion. The real Eskom Story is narrated beautifully in a book titled, “A Symphony of Power”. The book was originated by Engineer Allen Morgan, a third generation Eskom Guardian who became the Group Chief Executive of Eskom in 1994, the year that marked the end of apartheid in South Africa – at least on paper.

It is a story of a World Class utility that was named the Power Company of the Year at the 2001 Financial Times Global Energy Awards in New York, in recognition for providing the lowest cost electricity, while making superior technical innovations, increasing transmission system reliability, and developing economical, efficient, and safe combustion of low-grade coal.

Allen Morgan was a distribution man through and through. He was capably supported by Engineer Jac Messerschsmidt, a second-generation Eskom Guardian who joined Eskom in 1967. He spent the next twenty years in various positions in Generation Group before his appointment to the Executive Committee in 1990. He was the general manager in the office of the Chief Executive and later moved to Distribution Group.

For his part, Jac Messerschsmidt was a scholar who contributed many papers in combustion engineering. Dr Mark van der Riet (who many want to believe is a first victim of State Capture) and I looked up to Jac Messerschsmidt. We wanted to be like him. Jac retired in 1999.

The Chief Officer of Generation Group who supported Allen Morgan was the late Bruce Crooks. He was not a graduate engineer but a technologist who joined Eskom in 1969 and was appointed to the Executive Committee in 1991, initially as head of Transmission Group and later moved to Generation Group. Under his leadership, generation plant availability broke through the 80% barrier in 1993. He then set a target called 90:7:3, meaning 90% availability, 7% planned outages and 3% unplanned outages. At the time the actual numbers were 80%, 14% and 6, respectively. The power station managers then were dumbfounded. This seemed like mission impossible, but Bruce Crooks was unreasonable. Every time they complained about the targets, he upped them a little more and those who could not tag along were forced to leave the organisation.

The leadership of Bruce Crooks inspired many of us. He set stretch targets and was unreasonable with himself and all of us. He gathered “greybeards” around him who assisted us to see around the corners, but failure was never an option. In 1998, plant availability reached an amazing 92.7% and in 1999 it was maintained at 92%. Sadly, Bruce Crookes died of cancer in 1999 and was replaced by Engineer Ehud Matya, a Wits University graduate who joined Eskom in 1985 and had 14 years of utility experience before he was appointed head of Generation.

The steep decline in Eskom operational performance started in 2002 and culminated in the coal supply crises of 2003, 2004 and 2005. The decline was later followed by the first load shedding incidents of 2008 which were triggered by the dramatic reduction in coal stockpiles. The emergency coal purchases were prevalent in 2003, 2004 and early parts of 2005. Approximately 19.1 million tons of coal (2003: 6.7 million tons) were transported by rail and road to the Eskom coal-fired power stations during the 15-month period up to March 2005.  Of this, 3.1 million tons were transported by rail and 16 million tons by road and by white coal transporters.

The increases in the purchase cost of coal per ton were then higher than 25% year on year and the beneficiaries were tied collieries commonly known as cost plus mines. A submission is made that cost-plus mines have always under-performed and have used Eskom as their cash cow.

From the Eskom Story: A Symphony of Power we know that Eskom’s first ever cost-plus contract was in 1968 with Blinkpan Coal Mines to supply coal to Komati Power Station. Eskom could obtain capital at a cheaper rate than the mining houses could. It provided most of the capital associated with the development of the mines especially before they began producing coal and income stream.  The mines provided a coalfield with proven reserves and carried the actual mining operation.

On paper the cost-plus contracts looked much like a low-cost option to secure the security of coal supply to Eskom over the life of its power plants which is typically 40 years. In reality, Eskom had no control over the mining operations and hence its costs, the coal qualities and the geology of the coalfields. Eskom simply lost control of the coal costs coming out of the tied collieries. We also know from the archives that the cost-plus contracts were extensively reviewed and rewritten to give a more balanced risk exposure to both parties. This did not prevent the mines from using Eskom as their cash cow.

The steep decline in operational performance that started in 2002 continued and in 2015 resulted in South Africa experiencing 318 hours of load shedding amounting to 1062 GWh at a cost of R90 billion to the economy. As if this was not bad enough, Eskom announced that it would not be able to pay salaries from January 2015 and needed a bail out. Government responded by setting up an “Eskom War Room” that was chaired by the then Deputy President Cyril Ramaphosa.

Eskom was bailed out to the tune of R83 billion in 2015. This included R60 billion of subordinated loan which was converted into equity followed by R23 billion equity injection which was completed in March 2016. Brian Molefe and Anoj Singh were not in the employ of Eskom when this crisis was unfolding and the Guptas had no footprint in Eskom.

I submit that State Capture as a root cause of the current Eskom crisis is a ruse. As a matter of fact, Eskom’s annual reports points to the best technical operational performance since 2002 in the years 2016 and 2017. The increases in coal purchases were kept below inflation at 3.5% and 3.8%, respectively, in the years that are generally considered to be the peak of State Capture.

Despite the R83 billion bailout of 2015, Government has again bailed out Eskom to the tune of R69 billion albeit with conditions. I agree with those who say, “pouring money directly into Eskom is like pouring money into a sieve”. The root causes of Eskom’s current crises were summarized elegantly by Moody’s in their letter to the Eskom Management on December 6, 2016.

“the group’s financial ratios remain very weak as a result of rising operating costs driven by higher primary energy costs and ongoing growth in power purchase agreements with independent power producers (IPPs), as well as the continued roll out of its large capex programme”

There are two other causes that Moody’s did not mention but are critical. The declining sales volume and the weak technical leadership at the top. Eskom needs operational generation experience at the top to turn things around. It needs the likes of Jac Messerschsmidt or a Bruce Crookes.

Unless all these causes are addressed, bailing out Eskom will continue to be like pouring money into a sieve irrespective of whether it is restructured and unbundled or not.